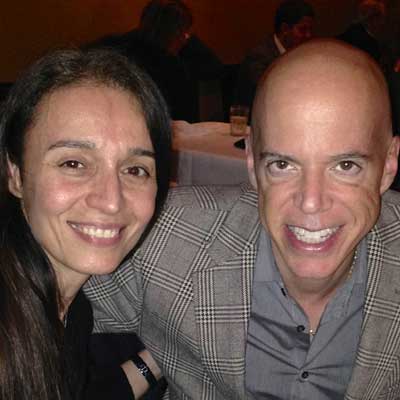 Lama Tolaymat, MD MPH FACOG (born March 30, 1970 in Homs, Syria) is the first Syrian perinatologists woman in the world to be board certified.  As a perinatologist, a medical doctor, an educator, a researcher and an activist for women, Lamas’ career path and lifetime triumphs have provided thousands of mothers to be and their babies with safe deliveries thus saving lives on top of being an inspiration to Middle Eastern women in the 21st Century.

Mr. Farouk obtained his Electrical Engineering degree from Alexandria University in Egypt and postgraduate engineering certification from La Sorbonne University in Paris, France.  Soon after Mr. Tolaymat completed his education, Farouk worked many years at prestigious jobs ranging from high raking government positions to working for large multinational corporations.  Upon arrival to the US, he became a Professional Engineer (PE) in order to be able to employ his previous engineering degrees and experiences and to be financially responsible for his children and wife.  Mr. Farouk is a man of intense faith and spirituality, a true example of a family leader, a man with a solid moral integrity, which is so hard to find in today’s material world.

Lama’s mother Shadia is a woman who embodies by her actions, sacrifices and compassionate heart the true meaning of being a mother and a wife.  Shadia is a lady who has devoted her life to her husband and children, who will do anything for her family, friends and to anyone in need of help, a giver.  Shadia benevolence is the stepping-stone and inspiration that has conserves the unity and the progress of the family.   Farouk and Shadia have been married for close to 50 years and still reside in Florida.

As they say the apple does not fall far from the tree, Lama’s younger brothers Thabet and Shadi are both successful professionals and outstanding citizens.  Thabet Tolaymat is the first Syrian to hold a PhD in Environmental Engineer, works in a high-ranking position for the Environmental Protection Agency (EPA) and married to a pharmacist.  Shadi Tolaymat the youngest of the three siblings is a Cardiologist in San Antonio, Texas, married to a medical doctor.  Lama and her two brothers maintain a close and respectful relationship and they support each other in any way possible.

As a matter of fact, for Lama’s undergraduate years she had to record all of her classes in an old tape recorded that her grandmother gave her before departing her country of birth Syria in order to go home and complement her class notes, translate the words she did not understand into Arabic, learn those translations and do her homework and prepare for examinations.   Not yielding to the struggles Lama was inducted into the President’s List 1988, 1990 and Deans List 1991 based on her academic achievements and accomplished GPA.  She also was awarded a University Scholarship for Academic Achievement 1988-1991, was accepted into Who’s Who Among Students in American Universities and Colleges 1990-1991 and Chemistry Student of the Year 1990-1991.

In 1991, Lama moved to Gainesville, FL to pursue her dreamed of becoming a doctor and to continue with the medical legacy that her family has produced for many decades.  This big decision she made was not really a decision at all.  It preexisted in Lama’s decision making.  It was something she remembered wanting from her childhood years, it expressed itself as a wanting and ultimately as a need.  She wanted that, until it became this-the career and life she has now.

From 1999 to 2002, Lama lived in Miami, Fl.  Throughout those years, Lama worked vigorously as a fellow, graduated with her Master in Public Health/Epidemiology and aptly completed her Maternal Fetal Medicine Fellowship.  Her life became in a certain way, pretty simple after that.  Her first employment choice determined many of the choices that followed.  From the Lama Tolaymat who began her MFM career as an attending physician at a Jackson Memorial Hospital to becoming one of the top female MFM in the world not shy away from practicing independently.

Since 2002 to the present Lama has had numerous publications and co-authorship in multiple obstetrics journals and books chapters asserting her wisdom in the domes of contraception, cervical length, role of imaging modalities in obstetric emergencies, hepatitis B, HIV screening, diabetes in pregnancy, screening and neonatal prophylaxis in a large multiethnic country, prenatal diagnosis of extra lobar lung sequestration, the use of nasal bone for down syndrome screening, morbidity of unscheduled postpartum hysterectomies, prenatal diagnosis of choroid plexus cyst, the effect of volume of extruded abdominal contents in fetal gastroschisis and neonatal outcome, high risk/multifetal pregnancy, preconception counseling and ultrasound.  Some of Lama’s co-authors are legendary MFM leaders such as; Dr. Mary Jo O’Sullivan, Dr. Andrew Kaunitz, Dr. Luis Sanchez Ramos, Dr. Victor Hugo Gonzalez-Quintero and Dr. Dibe Martin.

Although Lama is only 45 years old, her work experiences cannot be underestimated.  Lama has served at teaching positions such as Assistant Professor of OB/GYN for the University of Florida and for the University of Miami Miller School of Medicine.  As a scholar she has received awards such as the Exemplary Teachers Award UF Shands (2007) and Golden Apple Award (2009-2010). Her MFM appointments include physician for Florida Hospital, Winter Park Memorial Hospital, Shands UF Health Hospital, Baptist Hospital, Memorial Hospital, Orange Park Medical Center, Jackson Memorial Hospital, Mount Sinai Hospital, Hotel Dieu Hospital and Damascus Hospital.   Lama also has the following certifications USMLE (Part I, II and III), RDMS, ABOG and MFM.

Without a doubt, Lama’s is one of the most talented, passionate and influential MFM in the 21st century.  With that said, she has to carry on with many responsibilities to the MFM medical culture, to the mothers and future babies who entrust their lives on her hand and to the duty she bestowed upon herself to advocate the importance of motivating Middle Eastern women to pursue a higher education.

Lama is married to successful businessman, entrepreneur and philanthropist Aitor. In the business world, Aitor has experiences in negotiating multimillion dollar contracts throughout the US, Latin America, Europe and Asia. He has established himself as a leader in the fashion business importing designer clothes. He has also built a legacy in the Music Industry working with celebrities such as Dr. Jose Antonio Abreu, Eduardo Marturet, Philip Glass, Carlos Orta, and Giorgio Armani among others.

As a philanthropist, Aitor is an activist for underprivileged children around the world and helping people with disabilities. Aitor’s philosophy is believing that the greatest form of helping others is to simply “do it and take action”.

Lama and Aitor are blessed with a beautiful, gracious, spiritual daughter, Jasmine.